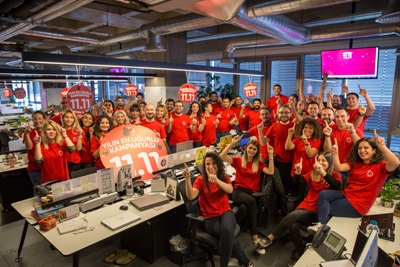 -  Took over the No.1 spot in turkey’s e-commerce market for the second consecutive yearin 2016, widening the gap between itself and the runner-upby delivering annual gross merchandise volume (GMV) of USD 563 million, reaching monthly unique visitors of 18 million, and posting 20% growth year-over-year
-  Opened regional offices in four provinces including Ankara and Izmir, which contributed to 3.4-fold increase in registered seller base and the growth of Turkey’s e-commerce market
-  Plans to strengthen its competitiveness in global markets by working closely with partnersin three Southeast Asian countries

Seoul, Korea, March 28, 2017—SK Planet today announced that its online marketplacen11.com achieved the milestone of becoming the No.1 online marketplace in Turkey in terms of annual gross merchandise volume (GMV) for the second consecutive year.

Turkey 11st maintained its number one spot in 2016 by delivering annual gross merchandise volume (GMV) of USD 563 million.
It has continued to widen the gap between itself and the runner-up (Hepsiburada), with monthly visitors reaching 18 million, and both GMV and the number of visitors posting over 20% increase year-over-year. *As of 2015, annual GMV reached USD 458 million with monthly unique visitors hitting the 15 million mark.

The n11.com owes its robust growth to the regional offices it started operating since September 2014. Taking into account the vast size of Turkey’s territory, n11.com divided Turkey into four large provinces and opened regional offices in major cities of each province, namelyAnkara, Izmir, Antalya, and Adana, and has offered a wide range of seller support programs in each region.

Thanks to such policy, the Turkey 11st that initially started out with 18,000 registered sellerssaw the figuresjump three-fold in just two years after the launch of the regional offices. Larger seller baseattracted more shoppers, leading to increase in the number of registered users and transaction volume. At the initial stage, most of the partnering sellers were heavily concentrated in Istanbul. However, as of 2016, over half of its merchants were based in other parts of Turkey, therefore satisfying customer demands for local products and contributing to the growth of Turkey’s e-commerce market.

SK Planet’ efforts to differentiate n11.com from its rivals through several localization strategies are behind such an achievement. SK Planet’s n11.com focused on establishing a mutually beneficial e-commerce ecosystem that is a win-win proposition for all those involved — the marketplace operator, participating merchants, as well as customers.
Such a focus helped n11.com to overtake competitors that includethe global e-commerce giant eBay (GittiGidiyor) which made an early entry into the market and Turkish online retailer (Hepsiburada), a former e-commerce leader.

“n11.com is no longer a latecomer to the industry. It has turned itself into the No.1 player in the Turkish e-commerce market, and we are determined to lead the growth of this market which is crowded with competition,” said Jo Won-yong, CEO of n11.com. “By using customer data analytics,we will provide specialized services in each region and offer product recommendations, and continue to create new business models for small merchants, andwork with them with a real spirit of partnership, while investing in new technologies.”

Turkey 11st has teamed up with local distribution companies unfamiliar with e-commerce, to givesellers and customers the convenience of paying for shipping fees directly throughn11.comat discounted rates. The fresh, new business model is recognized as a successful approach that is driving a paradigm shift in Turkey’s logistics market.

Meanwhile, SK Planet launched 11st in Thailand in February, after debuting in Turkey, Indonesia, and Malaysia. It is creating success stories in the global markets by transferringknow-how of 11st and e-commerce technologies such as search, recommendation, and chatbotservices to its global platforms.By drawing on its market insights and localization strategies, it aims tobecome shopper’s most favorite online shopping destinationin all of its global markets.