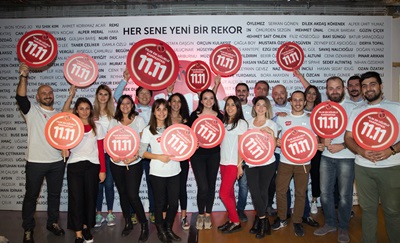 - A new e-commerce record was set, as Turkey 11st generated daily gross merchandise volume (GMV)  of 140 million Turkish Lila (equivalent to KRW 42 billion) in November 11
- Recorded a twofold increase in GMV from the same day last year, with 111 cars sold out in just 30 minutes, while selling record-setting 660,000 items in a single day
- As the leader in Turkish online market, Turkey 11st will continue to expand its capabilities and leadership as  it continues to drive growth and innovation across the market

Seoul, Korea, November 14, 2017—SK Planet announced that a new e-commerce record was set, as its Turkey 11st (www.n11.com, neonbir*) generated record breaking daily gross merchandise volume (GMV) of 140 million Turkish Lila, during ‘onbir onbir (11.11)’ shopping festival.
*The name 'neonbir’ stands for n11. In Turkish, ‘Ne’ represents ‘n’ and ‘Onbir’ means ‘11’ By the close of the trade, ‘onbir onbir’ festival, the Turkish equivalent to 11 Festival set a new record for the most online sales in one day. The shopping festival also broke its own record by generating a twofold year-on-year increase.

The event held under the slogan of ‘24-hour online shopping marathon’ saw 111 Volkswagen Golf cars sold out in just 30 minutes, 81 of which sold in just one minute from the opening of the festival. For the first time in Turkish online market, 111 units of iPhone X were made available for pre-order, all of which were sold out within the first hour of the day. And in just one hour from the opening of ‘onbir, onbir’ shopping festival, 23,000 orders were placed, with 50,000 units of products sold.

More than 8.4 million shoppers visited n11.com during the day-long event, with more than 80 percent of the total traffic coming from mobile visitors, and more than 54 percent of all orders placed via mobile. New sales records were set across all product categories, as shoppers purchased six tons of olive oil, 17,000 tires, 26,000 pairs of shoes, and 11,500 bottles of perfume.

Turkey 11st maintained its number one spot in 2016 by delivering annual gross merchandise volume (GMV) of USD 563 million (equivalent to KRW 645 billion, based on exchange rate at the time), after achieving the milestone of becoming the No.1 online marketplace in Turkey in terms of annual gross merchandise volume (GMV) in 2015 in just three years after entering the market.

Turkey 11st has also posted strong user and seller growth momentum. Figures from end of October show that the number of its registered users reached 11 million, up 34 percent from the end of 2016, and the number of its registered sellers rose over 33 percent to hit 81,000*. Its annual sales volume is expected to cross the USD 700 million mark(equivalent to KRW 780 billion based on exchange rate on November 11) this year for the first time.

*As of 2016, its number of registered users recorded 8 million, and registered sellers reached 62,000 The n11.com owes its robust growth to its differentiation strategy. SK Planet’s n11.com focused on establishing a mutually beneficial e-commerce ecosystem that is a win-win proposition for all those involved — the marketplace operator, participating merchants, as well as customers. Such a focus has helped n11.com to overtake competitors that include the global e-commerce giant eBay (GittiGidiyor) which made an early entry into the market and Turkish online retailer (Hepsiburada), a former e-commerce leader.

Commenting on the biggest ever ‘onbir onbir’ shopping festival, Jo Won-yong, CEO of n11.com emphasized, “We’ve reached some fantastic results. Not only was a new e-commerce recordset in terms of sales volume, 111 cars were sold out in the first 30 minutes of ‘onbir onbir’ day. He also added “Our drive for innovation has put us in the number one spot in the Turkish market for three consecutive years, and we are committed to leading the market with innovative products and services.”

Previous SK Planet Celebrates a Major Upgrade to 11STREET Global with “11th Month of Deals” Promotion 2017.10.31
Next No posts found.